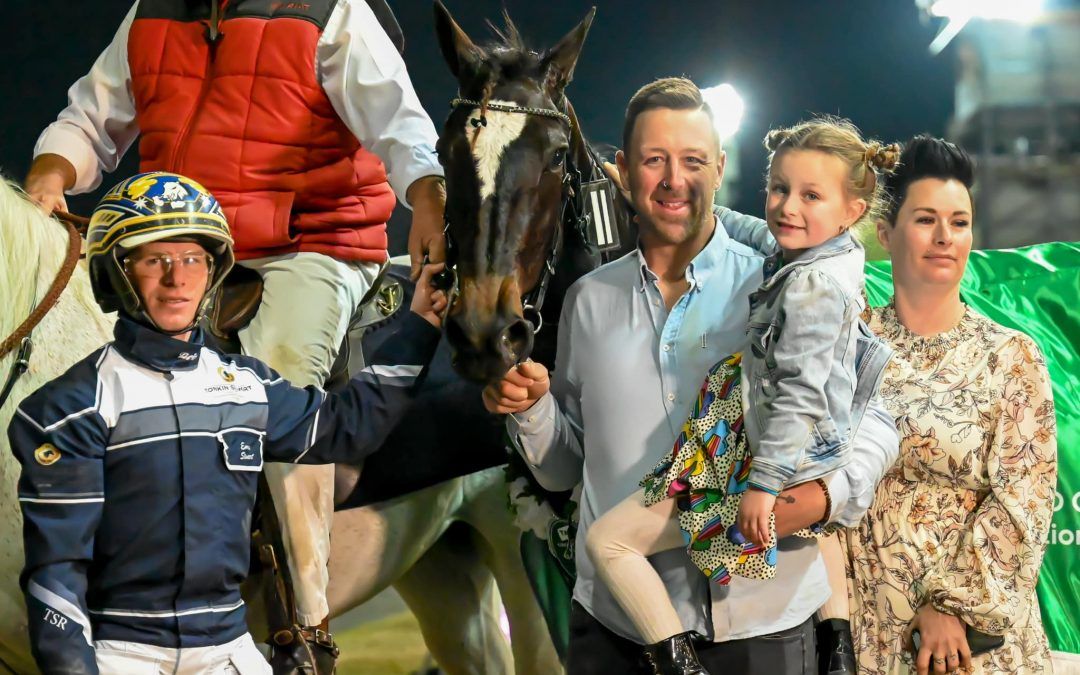 Soho Historia produced a sensational sprint to land the Group 1 TAB Queensland Oaks (2138m) at
Albion Park on Saturday, July 23.
Turning for home, driver Mark Pitt, trainer Emma Stewart and part-owner Aaron Bain all said they
hoped the filly could run a place.
But Soho Historia had other ideas and “sprouted wings” to gather in the leaders and score a 1-1/2
metre win in a mile rate 1:55.2.
The victory gives Aaron Bain his fifth Group 1 success in seven months.
Parisian Artiste was the first on December 31, last year, then Spirit of St Louis has collected the
Ballarat Cup and Schweppes Sprint.
But the exhilaration of the finishing burst of Soho Historia will be etched in everyone’s memory
forever.
Backed from $11 into $7.50, the three-year-old filly defeated Amore Vita ($1.55 fav) with Steno
($5.50), 3-1/4 metres away third.
Soho Historia had to be attended by the blacksmith pre-race for a shoe issue, but it did not prove to
be a problem in the race.
From her shocking draw of 11, driver Mark Pitt eased the filly back to second last early and didn’t
make his run until coming off the back.
Soho Historia was forced extremely wide on the home turn and gave the leaders about 20 metres
start up the home straight.
But she unwound a paralyzing burst to gather them in and claim Group 1 glory.
Aaron Bain paid tribute to trainer Emma Stewart and her partner Clayton Tonkin.
“They are freaks,” Bain said.
“I couldn’t get her to win at Port Pirie, and they have won an Oaks with her.
“Emma said the filly could win a Group 1, and she was right.”
Bain sent Soho Historia to Emma Stewart in late March, and she is now unbeaten in six starts for the
trainer.
Mark Pitt was amazed by the filly’s finish.
“I knew she had a good sprint, but I was so far back I thought the best she could do was run a place,”
Pitt said.
“She really knuckled down – really, she has come from nowhere.”
Emma Stewart also thought perhaps a second place might be best turning for home.
“I was at the start of the straight and could see how much ground she had to make up,” Stewart
said.
“She is something special, she has just kept improving.

“I had to do a lot of talking to get the connections to bring her up, but I’m sure they are now glad
they did.”
Aaron Bain Racing, Summit Bloodstock and Aaron Bain own Soho Historia.
The group, and a number of other owners, also had Cover Girl in the Oaks and she ran nicely to finish
fifth.