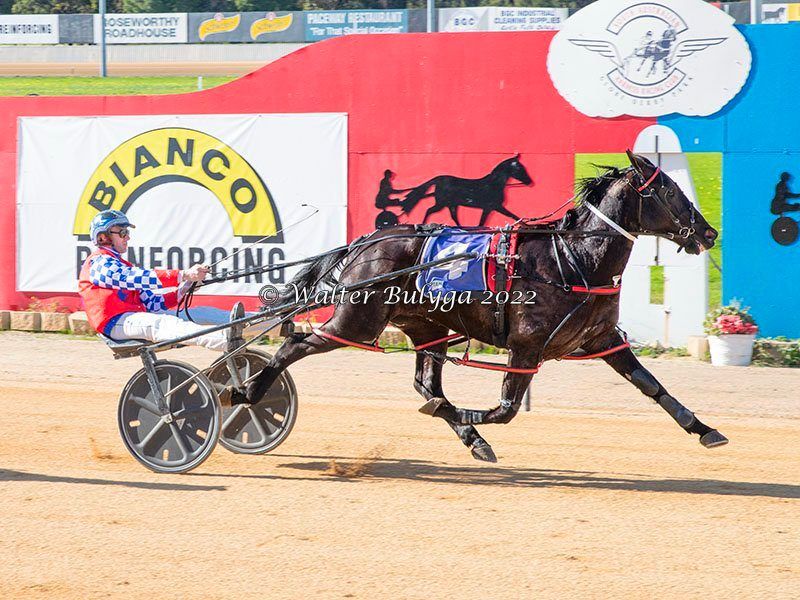 The ABR 100 Club 2.0 completed the journey from the sales ring to the winner’s circle when
Justcallmeangus won at Globe Derby Park on Monday, July 4.
Trained by Aaron Bain and driven by Wayne Hill, Justcallmeangus, backed from $1.90 into $1.30
favourite, led throughout to win the North East Group Pace (1800m).
He rated a smart 1:58.1 in scoring a five-metre win without being fully tested.
Trainer Aaron Bain said it had been a special victory.
“To take 200 people from buying a yearling to have a winner on the track was fantastic,” Bain said.
“It took a while for various reasons to reach the track but now it looks like they are going to have
plenty of fun.
“Obviously, when you buy a yearling there is hope, but you never know until they are broken in and
go into training.
“With ‘Angus’, he has just kept improving once we discovered what was hurting him.”
Justcallmeangus was found to have a dislodged bone fragment in a hock when first placed in work.
Bain said he had been pacing a little roughly which was because he was in pain.
“Once the injury was discovered and fixed, he has gone from strength to strength.
“There is no doubt he is a progressive horse.
“From the first time I saw him, I liked him.
“I felt at $6500 he was a value purchase and perfect to give the ABR 100 Club 2.0 members to follow
him through.
“They had Bottle Rock as a ready to go horse, and ‘Angus’ to come. Now Bottle Rock is in
Queensland and ‘Angus’ is in Adelaide to watch.”
Justcallmeangus was bred in Kapunda by Stephen Norman.
At Globe Derby Park, driver Wayne Hill had to urge the three-year-old to find the front as Cyclone
Brenda ($11.40) was kicking up inside from gate two.
But Angus was able to find the lead and Hill had him travelling comfortably.
With the two first quarters of 30.7 seconds for the last 1600 metres, Hill increased the tempo for
29.8 and 28.6 seconds for the last two quarters to rate the winner perfectly.