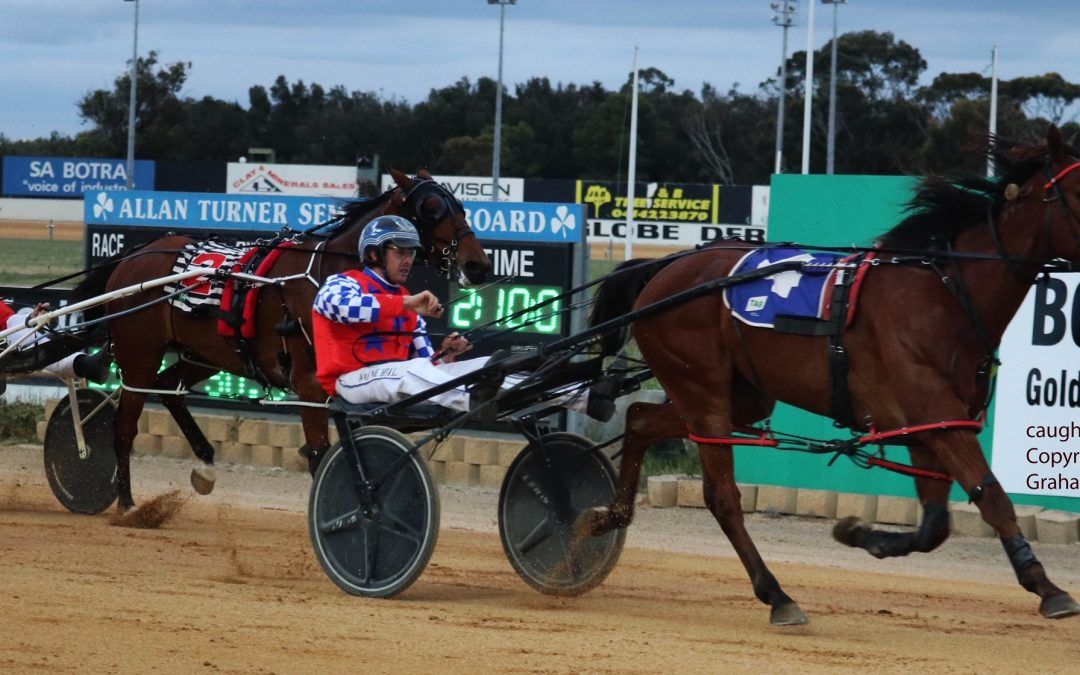 The Kapiti Express returned to winning form at Globe Derby on Saturday night giving a big lift to the
ABR Lads Club, and one member in particular.
Loxton butcher Bill Ebert is one of the Lads and was on course to celebrate the victory.
Bill is the brother of the champion and legendary Port Adelaide footballer Russell, who passed away
the day before after a year-long battle with leukaemia.
ABR offers its condolences to Bill and the family and was happy that we were able to give a bit of joy
in such a tough time.
He is also an owner of It Aint The Money which won at Albion Park in Brisbane on Thursday night.
The Ebert-Bain connection began in Queen Elizabeth Hospital 21 years ago.
Bill Ebert was in the cardiac ward having had a triple heart bypass and when he woke up post op, the
person in the bed alongside was Trevor Bain, father of Peter and grandfather of Aaron.
The pair struck up a friendship and have been in regular contact since.
One day last year, on a trip to Adelaide, Ebert asked to visit the Aaron Bain Racing stables where
Peter Bain showed him around.
Ebert left with a share in It Aint The Money and as a member of the Lads Club.
“I had always had an interest in horses but never really pursued an involvement,” Ebert said.
“Then, when I was looking around Aaron’s stables, the chance arose and I’m enjoying the ride.”
Speaking of the passing of his legendary brother, Ebert took comfort from Russell’s attitude.
“Russell was comfortable with his life,” Ebert said.
“He had reached 72 and enjoyed his time and contribution. The last 12 months were tough, but he
passed content with what he had achieved.
“I think. If we can reach that age and be happy, it has been a good life.”
At Globe Derby Park, The Kapiti Express was rated to perfection by Wayne Hill in scoring a 4-1/2
metre win in the TAB Venue Mode Pace (1800m).
Starting the $2.60 second favourite, The Kapiti Express sat outside the leader Artillery ($2.15 fav)
before drawing clear in the home straight.
Premonition ($17), which had trailed the Aaron Bain-trained pacer, tried to launch a challenge in the
home straight but was comfortably held finishing second, 1-1/2 metres in front of Artillery.
The Kapiti Express rated a very quick 1:56.2 with quarters of 29.9, 30.8, 28.3 and 28.1 resulting in a
last half of a super impressive 56.4 seconds.
Driver Wayne Hill could not hide his elation.
“Fantastic, I know he went super winning on Gawler Cup day (in the inaugural Gawler Platinum Cup)
but to be honest I was just as proud of him today,” Hill said.

“He didn’t run a 59 (second) first half, and 59 second half and slugged away, his last two quarters
were in 28.3 and 28.1.
“To do it sitting in the breeze is exceptional,
“I think as we get up in class, we don’t have to drive him as aggressive every time, the fact he had
those two quick quarters in him is going to help down the track.”
Trainer Aaron Bain was also delighted with the win.
“He is a horse that obviously