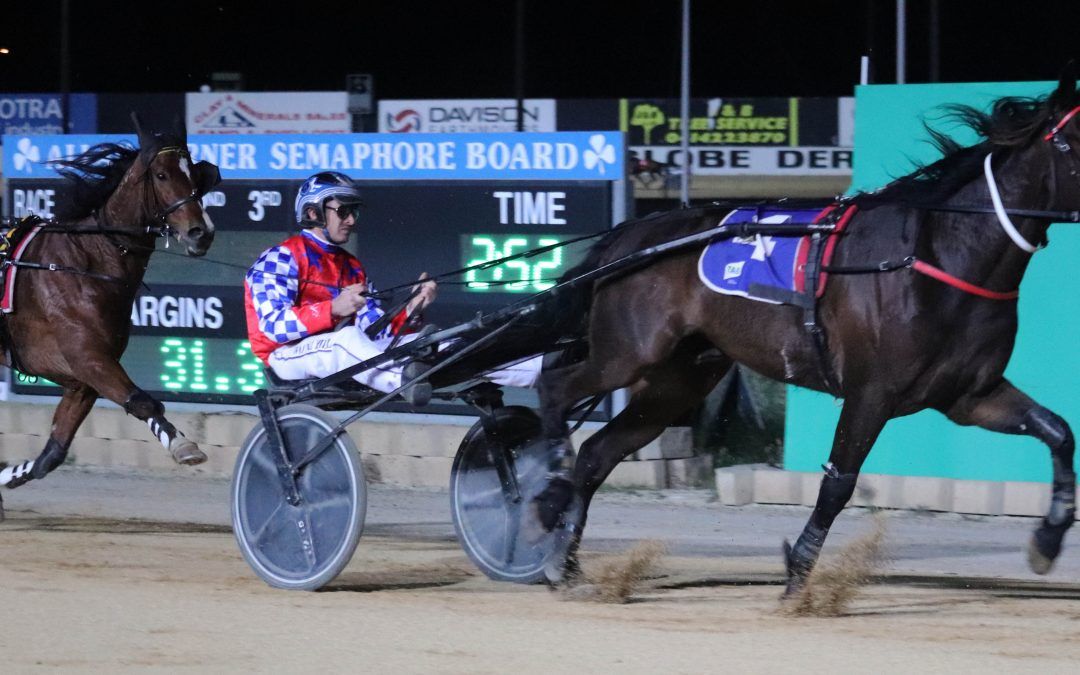 Squaregaiter Scruffy Doolan indicated he will have a strong career in South Australia with a brilliant
win at Globe Derby Park on Saturday, October 23.
Sensationally backed from $2.40 into $1.50 favourite, the Aaron Bain-trained trotter overcame an
early break to still win the Mitavite Studgro Trotters Handicap (2230m).
Driven by Wayne Hill, Scruffy Doolan eventually won comfortably by seven metres from Southern
Alps ($13.40) with Miracle Rising ($28.10), 1-1/2 metres away third.
At the finish, the five-year-old’s backers would have been on good terms with themselves, but not so
200 metres after the start.
Scruffy Doolan began well from gate four on the front row and trotted to the lead.
However, Southern Alps had begun brilliantly off its 30-metre handicap and charged up to attempt
to take the lead.
When Hill urged Scruffy Doolan to try and hold out Southern Alps, the trotter broke losing about 40
metres before settling back into a trot.
He settled at the rear of the field but got into a nice rhythm.
With a lap to go, Hill brought Scruffy Doolan to the outside and he accelerated around to be a clear
second halfway down the back straight.
Southern Alps had established a good break over the field, but the Bain-trained trotter quickly
loomed up alongside with 400 metres to travel.
Scruffy Doolan conquered the leader by the home turn and cruised up the straight to win
impressively.
Trainer Aaron Bain admitted to being a bit worried when the trotter broke early.
“I’m glad Wayne was able to get him back trotting as quickly as he did,” Bain said.
“Even with that break, with a lap to go I thought he would still be able to win.
“His trackwork has been outstanding and I think he is a really nice trotter who can go through the
classes here in South Australia.
“He has a good turn of speed when asked to improve as he showed moving from last to second
within 150 metres.
“And he is tough, so I was confident he would run down the leader.”