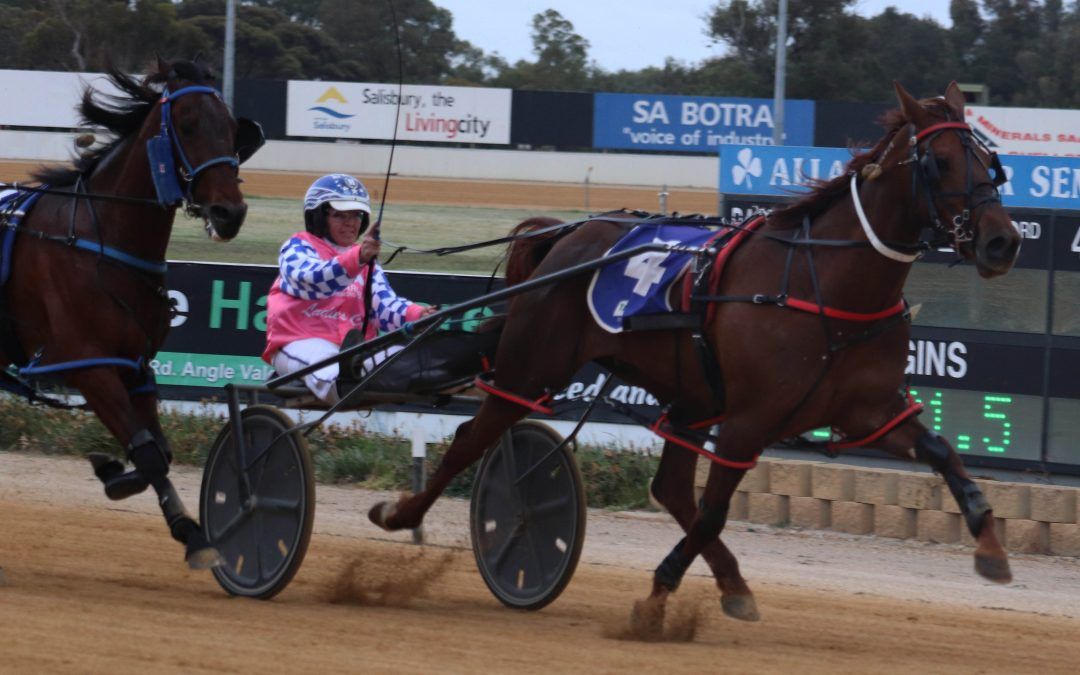 Arco, the pin up heroine of the Aaron Bain Racing Ladies Club, strutted her stuff for an adoring
ownership group at Globe Derby Park on Saturday, October 9.
In her first race at Globe Derby Park, Arco, with champion driver Danielle Hill back in the sulky,
reminded everyone of her talent with a tough effort to win the TAB Make A Date With Play Pace
(1800m).
Starting a well backed $2.15 favourite from gate four, the four-year-old mare was caught three wide
early, but Hill decided to push on to settle outside the leader.
Once in that spot, Hill was able to control the tempo but heavily backed Royal Speech ($8 into $5)
loomed up three wide with 600 metres to travel to ensure it was a fight to the finish.
Arco put the leader away with 400 metres to travel as Royal Speech kept pressing out wide.
In the home straight, Hill asked Arco to do enough to win without knocking her around and she won
by 2-1/2 metres from Royal Speech with pacemaker Celestial Daybreak ($4.80), nine metres away
third.
The mare rated an impressive 1:58.9 recording a smart third quarter of 28.8 seconds coming home
in 29.5 seconds.
Hill admitted early she had gone to Plan B.
“It had hoped to slot into the running line early but with horses pushing up inside I was caught
wide,” Hill said.
“So, I decided to go forward and hopefully get the spot outside the leader and fortunately I did.
“Once there, I felt sure I could beat the leader but then Jayson (Finnis) came up on Royal Speech to
make it a tough final 600 metres.
“The beautiful thing about Arco is she doesn’t like horses going past her, so when Royal Speech
came up, she quickened on her own.
“I didn’t push her out but just let her know the other horse was still there and she ran well strongly
to the line.”
Trainer Aaron Bain said Arco was “simply awesome.”
“She was outstanding to do the amount of work she did for the first 600 metres when she was three
wide.
“Then to race on the speed and run 28.8 (seconds) down the back.
“She continues to deliver on race day.
“What is special is the bond she is sharing with Danni (Hill).
“Arco has had five starts in Australia and is unbeaten when Danni drives, with four wins.
“Danni does get the best out of her, and it is delightful to watch.”
Bain said Arco was likely to run next Sunday in the $9999 Gawler Platinum Pacing Cup (2070m) as
part of the Gawler Carnival of Cups.

It is a race restricted to four and five-year-olds and looks likely to attract a strong field.
“There are going to be some very nice horses in it,” Bain said.
“IT will be a tough test and she will be one of the lowest graded horses in the race being only a 53
after last night.
“We will monitor early in the week to make sure she has taken no harm from Saturday night and
make a final decision later in the week.” 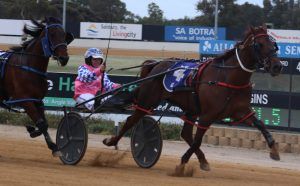