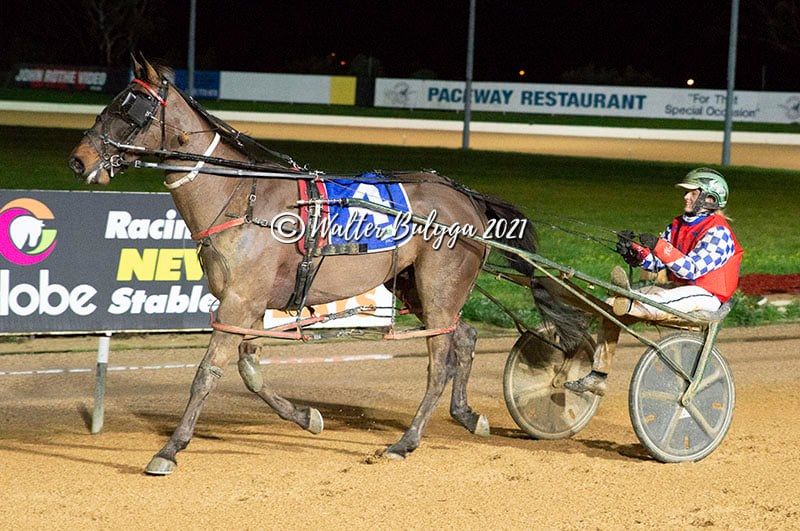 The form from the recent South Australian sprint series continues to hold up.
Series winner Brantley went on to win again at Mildura, then on Tuesday, July 27, Bottle Rock again
proved too good for Delightful Gnp at Globe Derby Park.
In the sprint final, Bottle Rock finished powerfully to grab second behind his stablemate Brantley and
relegating Delightful Gnp to third.
On Tuesday, in the North East Group Pace (1800m), Bottle Rock ($6.90), beautifully driven by
Samantha Pascoe, ran on strongly to score a 4.3 metre win from Cavalryman ($12.40) with Delightful
Gnp ($5), .1 metres away third.
Part-owned by the ABR 100 Club 2.0, the five-year-old gelding made it two wins in a row having
scored at Mildura on July 9.
In just 12 months of racing since joining ABR, Bottle Rock has won eight races, with six seconds and
three thirds from just 26 starts collecting in excess of $33,000 to give his owners a fantastic result
and #experiencethethrill.
Trainer Aaron Bain said Bottle Rock had gone “super.”
“To run 1:58.4 on a rain-affected track was excellent,” Bain said.
“I believe he is racing in the peak of his form.
“He enjoys being given a comfortable run early, then runs strongly through the line.
“I always thought he was the winner from the 600-metre mark.
“He did wobble a bit around the home and hung in but once Sam straightened him, he picked up
momentum again.”
Bain said he would likely back Bottle Rock up again at Globe Derby Park on Saturday in similar
company.
“Ultimately, we will send him to Narissa McMullen in Brisbane because I’m sure he will love their
handicapping system which gives him a chance to tackle easier races before meeting quality
opposition.”