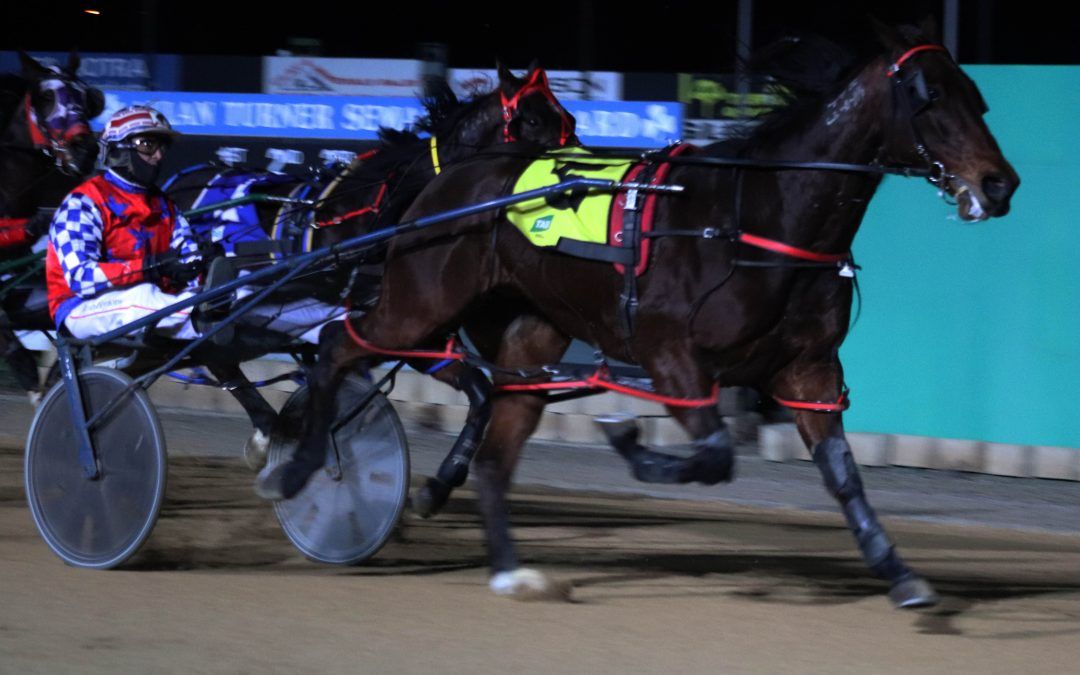 The Aaron Bain-trained Brantley is proving himself to be the ‘Scamper Specialist’ following his win at
Globe Derby Park on Saturday night.
The five-year-old made it two from two in races over the short 1385 metre trip during the 2021
Mitavite Scamper Series which will culminate with a $14,000 final at Globe Derby Park on Saturday,
June 26.
The victory was achieved in similar fashion to his first Scamper win on May 15.
Reinsman Ryan Hryhorec was able to settle Brantley one-out, one-back in the small field of five.
The $3.40 second favourite, Brantley was trailing the red-hot favourite Stratofortress ($1.55) and
Hryhorec waited until there was just 300 metres left to travel before asking the gelding to sprint for
victory.
With an excellent turn of pace, Brantley dashed past the leaders to win running away by 3-1/2
metres. Stratofortress took second 4-1/2 metres in front of the pacemaker Celestial Daybreak ($41).
Trainer Aaron Bain said the gelding was perfectly suited to the Mitavite Scamper series.
“He has a very good turn of speed and loves the short distance,” Bain said.
“Ryan has driven him perfectly each time sitting back then coming with his run up the home straight.
“I don’t think there are any horses in the series so far that have his electric acceleration.
“There are a number of heats, so I have to make sure he gains enough points to make the final.”
It was a good night for Aaron Bain Racing with It Aint The Money winning at Albion Park in
Queensland.
Trained and driven by Narissa McMullen, It Aint The Money ($1.70 fav) led throughout from gate
one to win the AQWA Constructions Qualifying Pace (1660m).
The eight-year-old rated a smart 1:54.2 in scoring his second consecutive victory around Brisbane’s
premier track.
Bain said the two Saturday night victories took the number of wins for Aaron Bain Racing horses to
11 for the month of May.
“We had a slow start but have now had 11 victories in the last fortnight for an excellent return.
“Mondooley Mach won for the stable at Mildura on Friday night for a good weekend.
“We were a bit unlucky at Mildura – Escavador led early in its race but had to be retired with a
punctured tyre, and Elleker Hanover finished second.”