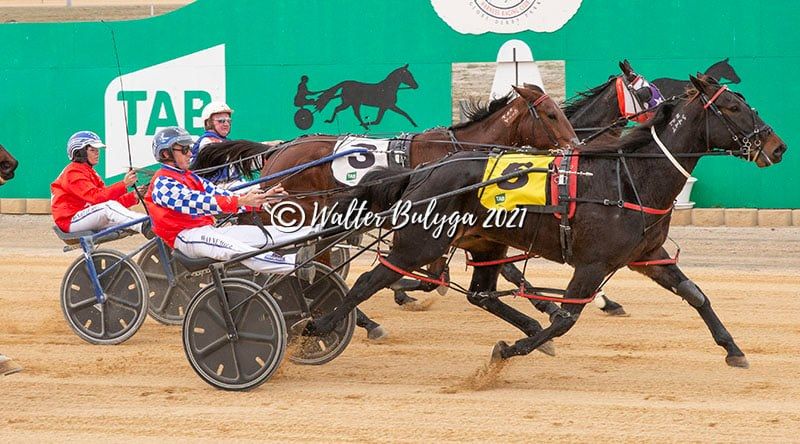 Bottle Rock returned to winning form with an impressive victory at Globe Derby Park on Monday,
May 24.
Trainer Aaron Bain decided to try and sharpen up the ex-New Zealander by running him in the
Scamper Series and it paid a dividend.
After a fourth in heat three over the 1385 metre trip on Saturday, Bain backed Bottle Rock up on
Monday in the Mitavite Scamper.
Backed from $5.50 into $4, Bottle Rock was able to settle one out, one back from gate five.
Arrokeefe ($8), which led and won on Saturday night, led again with the favourite Lindi Lincoln
($1.50) outside the leader.
Wayne Hill, driving Bottle Rock, pulled him wide with 300 metres to travel and he gathered in the
leaders to score by 1.7 metres from Lindi Lincoln with Arrokeefe a head away third.
Bain said Bottle Rock had taken benefit from Saturday night’s run.
“I thought he ran quite well on Saturday, but today, settling closer, he was able to finish best,” Bain
said. “He takes a bit of driving and Wayne did a great job.
“We’ll keep him in the Scamper series and try to qualify for a spot in the final which is worth
$14,000.
“While he might not have the sprint of stablemate Brantley, he could prove a danger in the final if it
is last runner standing.”
It was a good 24 hours for members of the Aaron Bain Racing Club 2.0 who were able to see their
unnamed two-year-old “Angus” take part in the run around at Globe Derby Park on Sunday.
“Angus” looked right at home and ran respectable times suggesting he will be making the racetrack
later in the year after a short spell.
Bottle Rock has been a great money spinner for connections and today was his 6 th win with four
seconds and a third from just 18 starts since having his first run for ABR in late July last year.
Bain said he was likely to send Bottle Rock to Queensland later in the year as part of the ABR
programming.